This section draws quotes and insights from a range of different sources to illustrate some of the family dynamics in the Spencer family, and the character of Gilbert Spencer.

“He (Stanley) rarely talked of other painters, but his brother Gilbert he clearly looked up to.

‘Oh, Gil is a much painter than I’ll ever be.’ I have heard him say more than once.”

– Recalled by Peter Mobsby and quoted by John Rothenstein in  Stanley Spencer: The Man: Correspondence and Reminiscences,  page 135.

“…the influence of Continental artists, of Matisse and Picasso especially, has seduced English painters from their old independence.  Only a few among the younger painters have kept their birthright, notably Stanley and Gilbert Spencer.”

“…at precisely the same moment, beyond the chapel walls [of Burghclere], Spencer [Stanley] found both inspiration and consolation in the meadows, lush hedgerows and country gardens of rural England.  He did so at a time when other painters and poets were turning (or returning) to the land.  His brother Gilbert Spencer, John Nash and Paul Nash were among those who alluded in different ways to

…a season of bliss unchangeable

Awakened from farm and church where it had lain

Safe under tile and thatch for ages since

Georgian poetry, like the painting of the period, treats familiar themes of retreat into the landscape and communion with nature, a regenerative process to which the son of Cookham certainly subscribed.”

Reflecting on his first one-man show at the Goupil gallery in 1923:

“I also note that I sold No 33 ‘St Remy, Provence’ for £8, and it acme to me in a roundabout way that it had been bought by Lawrence of Arabia.  I already knew that he was a man of deep mystery, but though I was ready to respect his wish to hide his light under a bushel in Egypt, I was not prepared to hide his light under my bushel in England, and boasted of the sale.”

“It was at the Goupil Salon that I met Lady Ottoline Morrell again, whom I had just met at Cookham before the war.  Thereafter if my reputation was not established, my domestic predicament was settled for Lady Ottoline said she wpould find me rooms at Garsington, and did so at 4 Blenheim Cottages….I often came into contact with interesting people…Lytton Strachey, Walter Taylor and Seigfried Sassoon…”

“At that time I had scarcely read any poetry, but did not find listening to W.B. Yeats difficult at all, easy in fact; all he needed was the shape of his listeners in his line of vision, though visionary he most certainly was.”

“It was remarkable how the Morrells succeeded in brining together successfully so many people with contentious views and even a misfit like me among the Bloomsburys.  Gertler summed up the atmosphere among us with D.H. Lawrence’s avowal that he ‘loved a good hater’…..Strachey said to Henry Lamb that I was like a breath of fresh air there.”

“Among the visitors announced by Milly, the parlour maid, was Mr Augustine Birrell.  I knew all about him from my father who had soaked me in Liberal tradition as a boy.  “

“Mark Gertler was a regular visitor at the Morells’ and there used to be a great build up before he arrived but he was a very sick man at the time and would go straight to his room and remain aloof.  I got to know him much better when I returned to Hampstead and we lived almost next door.”

On the occasion of T.E. Lawrence  inviting him to ‘Clouds’ to paint  a picture for him, Gilbert found a pseudo art circle of  soldiers camped uncomfortably in the cottage.

“For instance in the sitting-room a Company Sergeant Major sat with the poems of Laurence Binyon on his lap, but was he really reading them? Another soldier was said to be writing about sea voyages, but had only the Channel crossing in his experience.  Lawrence squatted Arab fashion on his dais, correcting galley proofs of The Seven Pillars of Wisdom which coiled about him snake-like, and finally tailed off among endless dirty black cups and saucers.”

After the First World War Gilbert moved to Hampstead and Stanley   went to live with Sir Henry and Lady Slesser at Cornerways not far from Cookham.  Harry Slesser, a barrister, Anglo-Catholic and Labour politician,  created a walking fraternity of which St Ambularis was the patron saint with the aim or friendship, fresh air, philosoph, religion and beer from  wayside inns. The members included G.K. Chesterton (poet and non-ambualnt), Sir EdwinDeller (university administrator), A.L. Bacharach (editor of Lives of the Great Composers), Val Spalding, Roger Grant, Wilfred Evill (solicitor) Stan and Gilbert.

On one occasion G.K. Chesterton was suspected of drinking cocoa rather than beer and was given a mock trial, but  Chesterton

“…elected to withdraw his plea of not guilty and…flung himself on the mercy of the court.  All fines were paid in beer, and the fine in this case was a heavy one.  The beer was served in the well of the court, after which we returned to Cornerways, singing as we walked of ‘the night we went to Birmingham by way of Beachy Head.’”

In Hampstead Gilbert became part of the Carline artistic circle at 47 Downshire Hill:

“On summer evenings we had our meals on the terrace in the garden, which had a strong Continental feeling about it.  Mrs Carline’s gardening was again of a highly individual kind,. She sowed seeds as though she were feeding the birds.  She strewed the garden with Corots, and even an occasional Cezanne would emerge.  We would move about among them playing a particularly unorthodox for of croquet.

“Hilda, with her auburn hair – she bore some resemblance to Whistler’s Symphony in White – was a sight to stir anyone who was romantically inclined.

“Here was a family which, like us, was professional.  It was all painting with them, except that Hilda had played the harp…Amidst all the ‘whirlings around’, as Mrs carline called everything, she too, after Da’s death, found evergy enough to turn to  painting, and of all the group – Sydney ([Carline], Dick [Carline], Hilda [Carline] Gertler, Henry Lamb, John Nash, James Woods, Richard Hartley, John Duguid and a host of others, including Stan and myself, she was the only one to achieve a one-man show in Paris.

Gilbert had many commissions for portraits including Professor Galbraith, Henry Whitehead, Sir James Robertson, Sir Robert Birley, Sir Geoffrey Keynes, but he was not always successful:

“I failed hopelessly with Sir William Bragg, and redeemed a bad drawing of John Nash many years later staying with Hilda Harrison.  I was struggling with it when Mr Asquith called, and sat down to watch me.  He was very respectful towards the artist, and full of trust.  We all went to Stratford Old Theatre later to see ‘Hamlet’, and I sat next to him.  I have heard him called the last of the ‘Gentlemen’ Prime Ministers.”

“There were other drawings to delight me, for I illustrated books for Aldous Huxley and H.G. Wells and, as a result of a letter from Eiluned Lewis…I was asked by County Life to illustrate her little book In Country Places.

“If anything he (Gilbert) was more eccentric than his more famous brother, Stanley, although on the surface he appeared more normal.” 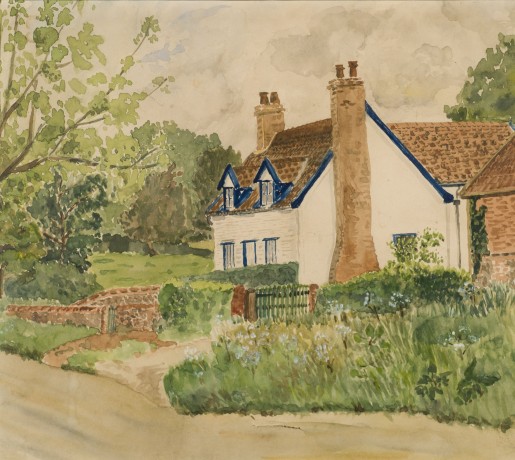